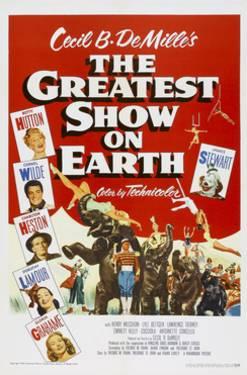 The Greatest Show on Earth won the 1952 Academy Award for Best Picture and  Cecil B. DeMille won for Best Director. Given the number of excellent films being produced by Hollywood in the 1950s, I found it unusual that this film would be considered the best picture. 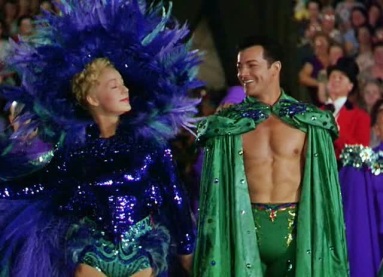 The movie felt more like a documentary of circus life than the engaging drama which it tried to be. The color cinematography and costuming were well done but the cast of established actors could not salvage the weak storyline.

Charlton Heston plays Brad Braden, the circus manager, as an unconvincing and unrelatable character. Betty Hutton and Cornel Wilde are trapeze artists attempting to upstage each other for the center ring. Again, the characters did not seem believable and the development of their character was lacking. Another character lacking development was ‘Buttons” A. Clown, which wasted the talents of James Stewart. Buttons was apparently a former physician who somehow killed his wife (I assume for benevolent reasons) and then joins the circus to escape from the police. There are a few other weak subplots that are not worth describing.

So how did this film win the best picture? I have two theories. First, DeMille was presented with the Irving G. Thalberg Memorial Award at the 1953 Academy Awards and perhaps the Academy thought in addition to this award, Best Picture and Best Director awards would make his evening complete. 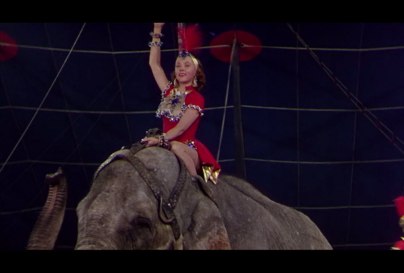 My second theory is that a very strong group of competing films split the voting enabling a lesser film to emerge victorious. This list of films includes four motion pictures that are considered classics and I believe are far superior to The Greatest Show on Earth. They include Moulin Rouge and  The Quiet Man (the great John Ford film with John Wayne and Maureen O’Hara). Even more memorable are Singin’ in the Rain and one of my personal favorite films, High Noon starring  Gary Cooper and Grace Kelly.

If you are interested in the circus life of the 1950’s perhaps you would enjoy this film; however, with a running time of what seems like a very long 2 ½ hours, I’d suggest watching one of the other four films mentioned above instead.

The name of our film’s director was burned into the annals of Hollywood history with Billy Wilder’s 1950 masterpiece, Sunset Boulevard as the main character, Norma Desmond, delivers the closing line, “All right, Mr. DeMille, I’m ready for my close-up”.  With a 40+ year career as a director spanning from his first silent film in 1914 and culminating with two Charlton Heston-led technicolor spectacles (The Greatest Show on Earth and The Ten Commandments), it’s no wonder that the name Cecil B. DeMille is one of the most revered from the Golden Age of Hollywood history.    While the grandeur of Cecil B. DeMille is not necessarily in line with my preferred aesthetics, the impressive scale and visionary nature of his filmmaking had the power to bring to life the biblical and whimsical to entertain the masses.  It’s no wonder that the Golden Globes (The second best award show 😉 ) named their lifetime achievement award after our film’s director with the Golden Globe Cecil B. DeMille Award. 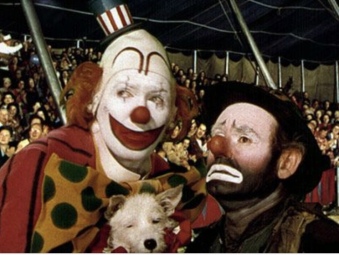 Similar to the lifetime achievement award, it is possible that the Academy Awarded Cecil B. DeMille his first and only best picture win for our current picture as recognition for his storied career and contributions to film as a whole. Although I do prefer the Gary Cooper and Grace Kelly film, High Noon from our nominee pool to this feature, DeMille’s ability to bring the spectacle of the circus to the silver screen is certainly a sight to behold.   .

While Charlton Heston does shine in this film, eschewing his brand of masculinity that reminds me of a somewhat gruffer Humphrey Bogart in Gone With the Wind, he lacks the likability that we have seen in other leading men in Best Picture Winners.   This rough around the edges character, Brad Braden (Charlton Heston), with “sawdust in his veins” is a much more complex character than a surface viewing would initially lead you to believe.  His tough exterior doesn’t break often, although there are moments when his humanity and compassion do peak through. 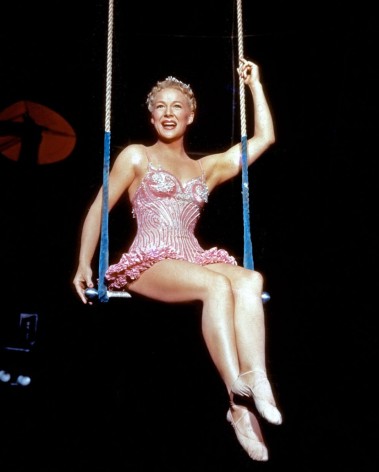 The foil to Heston’s character is Holly (Betty Hutton), a “flyer” whose abilities on the trapeze and bars have catapulted her to center ring.   As she enters the film, she is established as Charlton Heston’s love interest although that storyline is not fully developed.   Betty Hutton is a passable actress and her performance in this film lands very hollow based on her over-acting. Her love triangle with Brad and The Great Sebastian (Cornell Wilde) provides some intrigue, although like the rest of the plot of the film, it ultimately is underdeveloped.   The saving grace to the film is Jimmy Stewart, whose character Buttons is a likable clown with a dark past.   It’s hard for me to think of a role in which James Stewart diminishes the overall quality of a film.  In this particular instance, his natural acting ability shines a light on the deficiencies of his fellow cast.  Even though James performs in clown makeup throughout the entire production, he is still able to bring his humble, everyman charm to the role.   It’s not often the case that one would consider a Best Picture winner as a minor role, but for the incomparable Mr. Stewart this performance is and should be forgotten when considering his body of work. 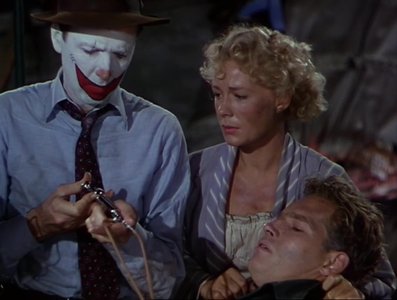 He only had so much to work with given how cheesy the script and storyline were. Also appearing in minor roles were Dorothy Lamour as Phyllis and Gloria Grahame as Angel.

The characters that really steal the show however are not our leading characters, but rather the actual circus folk depicted in this film.  The film splices plot between elaborate circus scenes that play almost like a documentary of a spectacular performance of the actual Ringling Bros. and Barnum & Bailey’s Circus troops.  This is a fascinating new territory for film as the footage not only serves as a dramatic ensemble character study, but also as a commercial for the circus.  Through using real acts currently performing during the 1951 circus season, it provides real incentives for fans of the film to go out and view their favorite performers in real life.  Personally, I loved seeing the spectacle of dogs riding horses. Additionally, there is a great cameo from Bing Crosby and Bob Hope that adds additional intrigue. 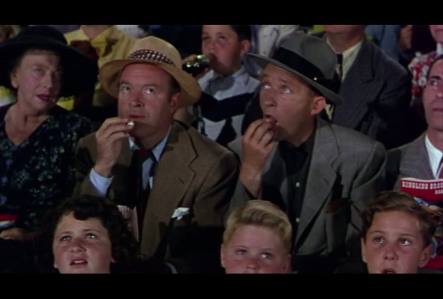 The film also provides behind-the-scenes coverage of moments that the average circus-goer would never get to see such as the circus train, the rigging and set-up of the iconic circus tent, and the practice routines for the various acts as they prepare for the night’s performance.  Even moments where Charlton Heston is going through a line-up of elephants and prescribing remedies for elephant-illness such as gin and ginger, are intriguing glimpses of a different world not often glimpsed by the public. As I watched some of the more harrowing trapeze stunts, I found myself on the edge of my seat hoping that we wouldn’t see an accident.  When it comes to world building Cecil B. Demille excels at bringing the grandeur of the circus to life, and depicting the magical place of wonderment and danger that delights adults and children alike.

The film has certainly dated itself with certain special effects including an epic train crash clearly filmed with models. According to IMDB, this film was “the first movie that Steven Spielberg ever saw. His father took him to the theater, promising him a trip to the circus. He was six years old at the time. In Spielberg’s 2005 movie War of the Worlds a brief clip of the train crash scene is seen when one of the characters is channel-surfing.” Besides the low-grade special effects there are a few instances 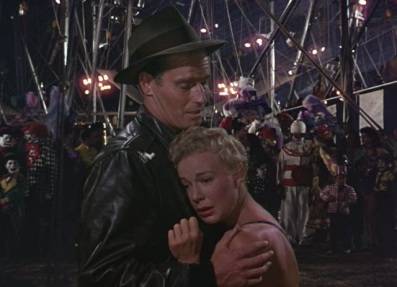 of blackface and jokes at the expense of the obese and dwarves that are not endearing in a modern context.   While I don’t have moral qualms with the concept of the circus in general, there have always been questions about the treatment of animals in the production of these spectacles. Even the the 2017 Hugh Jackman feature, The Greatest Showman, loosely based on the life of PT Barnum, incurred the ire of PETA due to Barnum’s abysmal track record of animal abuse.

Overall, I think this film was a step in the wrong direction from some of our other recent films.   While some of the films we’ve viewed in our journey haven’t aged well or are a little melodramatic, this film borders on the edge of bad.   The acting, special effects, script, and plot just couldn’t be redeemed by the wonderful circus footage. The film was also 2.5 hours long, which is quite a lot of viewing time that the film does not justify based on its content/plot. 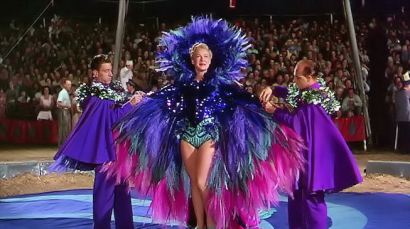 Not all of the best picture winners deserve to be remembered in perpetuity, and this film in particular is deserving of its place near the bottom of all best picture winners. Due to the time period, this film was produced during the heyday of the Hollywood Blacklist and McCarthyism and thus we are left with the result of what happens when Hollywood plays it safe.   This commercial for the circus was successful in making me want to see a Cirque du Soleil show in the near future, but not much else. See it if you want to laugh at some bad acting, or if you really like dated portrayals of trapeze acts.