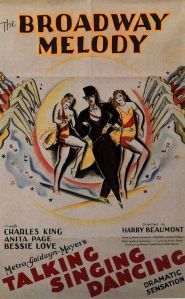 Wow – it’s tough rating films when moving from an emotional silent film about war to a light-hearted musical about life on Broadway. I’m trying to place The Broadway Melody into the proper context of its genre and place in movie making history. I am aware it is the first “talking picture” to win an Oscar and a musical to boot. Once again, I enjoyed the glimpse into history and the street scenes of New York City in 1929 were amazing. 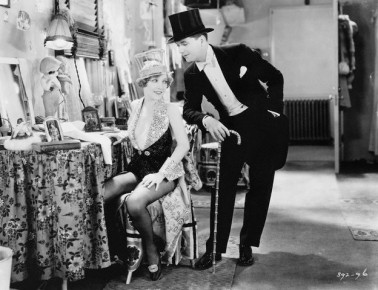 The story of two sisters trying to break into showbiz seems rather pedestrian but maybe in its era it was a fresher story. There were a number of good musical scenes especially if you like good tap dancing and surprisingly elaborate costuming. I was familiar with maybe two songs and in general am not a big fan of songs from musicals pre-1940 (at least I don’t think so – maybe this will change). I do enjoy musicals and as much as I may try to critique The Broadway Melody like a moviegoer from the 1920’s, it’s difficult to forget 80+ years of newer musical productions. I’m not sure why the technical production of Wings (1927) appears superior, but The Broadway Melody may just lack newer remastering.

In our current era of political correctness, some of the dialogue was actually alarming. Comments made in the film about women and people of various nationalities clearly reflect the thinking of a bygone time (at least I hope so); nevertheless, the repartee is interesting from a historical prospective. The wise crack about Scottish people completely baffled Elliot – that’s a good thing!

This movie will not be a favorite but I’m glad I watched it.

1929’s The Broadway Melody, definitely fell into a sophomore slump in the larger context of the progression of Best Picture winners. While I understand there were certain technological limitations in the transition between silent film and sound, this first sound winner fell flat. It is hard to ignore the lack of ambient sound in places where there is no dialogue or singing or dance numbers, and it seemed as though the cinematography suffered dramatically in an attempt to cater to this new technology of sound.

Let’s be clear however, I am not a musical naysayer. In fact, I rather enjoy musicals. However, the brand of musicals made in the 1920’s lacked the warmth and depth of the pioneering Rodgers and Hammerstein works. Even the sweet musical number “You Were Meant For Me,” fell short without any significant big uptempo bit to bring the show home. I can applaud a couple of really spectacular dance numbers, especially a scene where one intrepid dancer somehow tap dances while on point. The sheer physicality of the act still amazes me.

Apart from the song and dance however, we are left with a pretty shallow shell of a plot. Two sisters from the Midwest come to the big city trying to make it big on Broadway. Eddie Kearns (Charles King), a broadway song writer, brings the girls to the city because he fancies Hank (Bessie Love), but he falls for the other sister, Queenie (Anita Page). First of all, not to be that guy but who gives a girl the nickname of Hank? Just saying. Secondly, the melodramatic nature of the simple plot and the overacting were really the nails in the coffin of this mediocre film. Now with that said, I do have to make the concession that this film was just an early example of Hollywood getting its feet in the door with sound films. Also, the fact that not only was this a “talkie”, but it also had to layer dialogue, singing and orchestral accompaniment, shows the early trials and tribulations of sound mixing. It was a nice try by Hollywood to make a sound film work with such new technology, but there is a reason that people do not talk about The Broadway Melody anymore. Check it out if you feel like it, I guess. 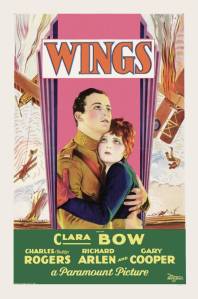 When I learned our first film would be a SILENT film, I thought this could be a long 141 minutes. Much to my surprise, I thoroughly enjoyed this movie! Just reissued in blu-ray, the movie had a wonderful score and its sepia coloring gave the film a feeling of warmth. I also hadn’t imagined the visual history lesson a film, produced in 1927 portraying events surrounding a fairly recent WWI, could provide. Although the story had some familiar themes of love triangle and men going off to war, it is possible this may have been new film territory.

I was amazed at the technical quality of the production especially the dogfight scenes. The acting was solid and I guess one should expect expressive faces and mannerisms from silent film stars. Even got to see a brief scene with a young Gary Cooper! The glimpse into life in Paris and America in the early 1900s was especially memorable. As this is the first movie we are rating I wasn’t sure where to start but 8.0 seemed like a good place for a film I thoroughly enjoyed but knew I needed room to place films that I’m sure will evoke greater emotion and/or amazement. Let the film history tour commence….

Wings was the first movie to ever win the award for Best Motion Picture at the Academy Awards. However, contrary to the modern incarnation of the award, the award was actually dubbed Most Outstanding Production. Wings was also the only silent film to ever win the best picture honor, and that makes sense because it fell on the cusp of the new technology of sound becoming a viable option for film productions. While there had been short films in the past synched up to record players, 1927 was the year when the first “talkie”, The Jazz Singer, premiered. Wings was given the daunting task of providing the last hurrah for silent films as Hollywood entered a new era.  Now in order to notify a reader of any possible bias in my writing, let it be known that I do not like silent films at all. I understand their historical significance but in the modern era I find it quite archaic to watch actors move their lips and wait for the title screen to tell me what a given exchange was about. I sometimes even prefer to pretend I am in Mystery Science Theater 3000 and make up the possible words they could be saying, but that is just my personal preference. With those concessions made however, I enjoyed Wings more than I thought I possibly could.

It takes about the first 20 minutes of the movie for a modern movie viewer to get used to the format of the silent film, and as soon as you do the fact that this film has no sound suddenly dissolves into the background as you become enveloped in the bizarre love quadrilateral between Jack (Charles Rodgers), David (Richard Arlen), Sylvia, (Jobyna Ralston), and Mary (Clara Bow). The special effects for 1927 were honestly spectacular, and really put the awful movies Ed Wood-esque B Movies made in the 1950’s and 1960’s into perspective. 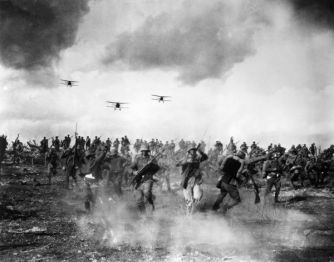 The score also provided a decisively driving force in the film, even though we did hear the remastered 6.1 digital sound on our blu-ray copy, it still maintained the original score. The dog fights in the film were truly ahead of their time and the limits the filmmakers pushed their dated technology to really deserve praise and admiration. There were even parts of the film where plane crashes had been colored by individually tinting each individual frame, providing a particularly stunning visual contrast to the monotony of black and white visuals.

Overall, I really enjoyed Wings more than I ever expected to, and is definitely in my top 10 favorite American silent films I have ever seen. If I were a moviegoer in 1927, I too would have wondered why sound was even important with silent films being able to provide such a spectacle of a production. If one has any interest in film history at all, I would highly suggest checking out this film. Also, made two years before All Quiet On the Western Front, it set the standard for production of war films, especially those about WWI.

Background of the Main Contributors

Alex’s Background – A life long Pittsburgher, has a BA from Knox College with an Economics major and an Art History minor. He also has an MBA from the University of Pittsburgh. In addition, his son Elliot, Alex’s family includes wife Debbie, Kevin age 28, a resident at UPMC Shadyside and daughter Natalie age 24, an HR associate for Eat n’ Park. If interested his professional life, check out his Linkedin profile – http://www.linkedin.com/pub/alex-m-kindler-cpa-abv-cff-pfs-cva-mba/12/3a/368

As a CPA and business valuator by day, Alex was looking for an intellectual outlet for his artistic leanings. This blog will provide a fun, creative and cultural path to explore film history – good for father/son bonding as well!

Elliot’s Background– Elliot is a 30 year old who graduated from Emory University with a degree in Religion and Film Studies and an MBA in Corporate Finance from the University of Pittsburgh.  While his very practical undergraduate major offered him plenty of opportunity, he found comfort in big business and is currently working as a financial analyst for a leading cybersecurity company.  While Elliot has dabbled in film making and production, his true passion has always been film appreciation.  Sporting a collection of beta tapes that numbers in the 100s not to mention his VHS and DVD collections, Elliot has been an avid film fan since he overcame his severe fear of scary films like Balto and The Land Before Time.   Elliot is married to his amazing wife Sarah who teaches 6th grade English in Leesburg, VA. Follow him on Instagram, LinkedIn, or check out his personal website www.elliotkindler.com