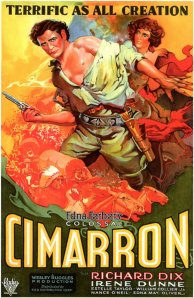 I am a big fan of the Western film genre, thus I was anxiously anticipating this film which I assumed was a Western. Although the film has elements of a Western, it would be inappropriate to consider Cimarron a pure Western. The film is an epic that begins with a classic scene recreating the Oklahoma Land Rush of 1889 and ends in the then modern day 1930. The Motion Picture Academy has always seemed to favor large scale epics and spectacles, and this Academy Award winner is no different. The most famous scene in the movie is one depicting the Oklahoma Land Rush, which involves a cast of hundreds racing across the dusty plains. The story, written by Edna Ferber, traces a family’s travails and evolution over a 40 year period. The changes in the family mirror the changes in Oklahoma from an untamed territory, to entering statehood and finally becoming an industrialized oil behemoth.

Although I realize this is a fictionalized tale, the story of the Cravat family seemed a bit far-fetched. The father would leave for years only to reappear and have the family react like he had just returned from a day at the office. Possibly the novel explained these absences in greater detail then permitted in a 123 minute movie, but to me, the film story was lacking. 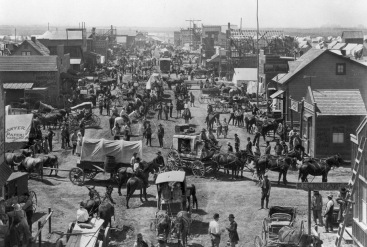 The story of the Oklahoma territory was interesting and felt like a reasonable portrayal of historical events albeit with expected cinematic hyperbole. The movie did discuss prejudice and persecution of American Indians which I’m sure was eye-opening to many film-goers. However, the movie was also full of stereotypes regarding blacks, Jews, Indians, gold-diggers and prostitutes which I found amusing, but at the same time somewhat disturbing as these portrayals may have reflected widely held beliefs of this era. This is our second movie with a stutterer; obviously a common character role at one time which today would probably fall into the politically incorrect category – The King’s Speech an obvious exception.

From the perspective of film technology, Cimarron does not represent any advancement from previous Academy Award winners and the choppiness of scene changes may have been a step backwards – possibly this is why the director opted to go uncredited. Although I’m a big fan of Westerns, I will have to wait until 1990’s Dances with Wolves before I see my next Western Oscar winner.

Cimarron is a western of epic proportions that portrays the time period of the Oklahoma land rush.  When I first sat down to watch this film, I really had no conception as to its subject matter other than its Western genre.  However, Cimarron defies the classic classification of the Western genre because of its focus on the more political and social context of this new frontier.  Oklahoma is depicted as the last hurrah of the Wild West, as the land which had been previously been allotted for Native Americans is opened up to settlers from across the country.  The movie begins in a frantic dash of thousands of hopeful settlers, equipped with a myriad of different kinds of wagons and horse-drawn transportation, all hoping to gain a choice claim of the million acres of newly-opened land.

Within the first five minutes of the movie, it is immediately made known that this film was made in the 1930’s through the characters’ attitudes towards race.  The main characters Yancey Cravat (Richard Dix) and Sabra Cravat (Irene Dunne) are sitting at a table with Sabra’s parents, and Sabra’s father asks an unseen entity for more air.  The camera then tilts up to reveal Isaiah (Eugene Jackson), the family’s African American servant suspended from the ceiling fanning the family with a palm leaf.  I was personally shocked at such an image being portrayed on film, especially so nonchalantly.  Yancey’s father-in-law next goes on a rant against Native Americans and how they are a dirty people.  While Yancey is a Native American rights activist as shown through his editorials in the paper, the blatant racism is hard to ignore.

The movie actually spans over 40 years, which is fascinating mechanism to allow us to watch the characters develop over such a large segment of their lives.  However, spanning this stretch of time sacrifices significant character development and leaves the audience to try and connect the loosely connected dots.  Yancey, the main male protagonist describes at the beginning of the movie that he can only stay in one place for a maximum of five years.  This curious trope impacts the plot throughout the duration of the film, and the gaps in action are bridged by Yancy returning after 5 year stints of abandoning his family.  While it could be said that he was supposed to embody the rambling and restless spirit of the west, to me his abandonment shows a certain emotional immaturity and resistance to commitment.

The initial sojourn to Osage, the boom-town in Oklahoma where the majority of the action takes place, is the most exciting of the slices of life depicted in the film.  Yancy arrives as the town is struggling to find a moral compass and suppress the outlaw population from ruling the town. 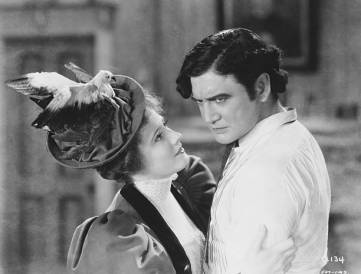 Yancy, through his career as a writer and a lawyer had become acquainted with many of the new residents of Osage, and quickly become a folk hero.  Keeping the town safe through both his quick draw with his colt pistol and his quick wit in his newly establish Osage Wigwam, Yancy becomes a predominant member of Osage society. However, after his five years is up, Yancy leaves his wife and children in Osage and heads further West.

Yancy’s wife Sabra is left to run the paper, which while at some points shows her exhibiting agency as the empowered female editor of a newspaper, however she reveals that she left Yancy’s byline as editor and proprietor of the paper even in his absence.  Sabra is the real unsung hero of the film, even becoming a congresswoman by the end of the story.  However, the film really cut down the main heroine’s importance, instead focusing on the male’s impact to the town as compared to his wife’s contributions (which were far greater).  Overall, this movie was an outdated but enjoyable look at the history of Oklahoma’s founding, however it does not translate into our modern society.   Despite this failing, I still would recommend it to any fan of Westerns who is looking to see another take on this classically defined genre and also willing to keep an open mind to the early date of the film’s production.